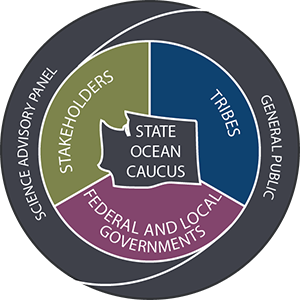 The State of Washington maintains a government-to-government relationship with federally recognized Indian tribes in Washington, consistent with the State/Tribal Centennial Accord of 1989. This involves respecting sovereignty of each government and working to resolve issues of mutual concern in a manner that reflects this sovereignty.

Throughout the planning process, State Ocean Caucus agencies will work with tribes at a government-to-government level, including regular communication and tribal consultations. Tribal consultation is a process of seeking, discussing and considering views of the affected tribal government(s) before decisions are made.

Through treaties with the United States, the four Coastal Treaty Tribes (Hoh, Makah, Quileute and Quinault) reserved hunting, fishing, and gathering rights to access and utilize the plants, mammals, fish and other resources of the Olympic Peninsula and its adjacent waters in their respective treaty areas in perpetuity. Each of the Coastal Treaty Tribes regulates and controls tribal fishing at its usual and accustomed grounds in accordance with tribal law and judicially prescribed fisheries management responsibilities. Each tribe maintains its own fisheries management and enforcement staff and engages in a wide variety of resource stewardship activities.